Last month I mentioned two Kickstarters for terrain projects, one new, one old. The new one is TerrainCrate from Mantic Games, a line of hard plastic terrain in 28mm scale for fantasy gamers. The Kickstarter is officially over, but today they've released their pledge manager, and with it have begun their "late backer" program. This means that if you missed out on the Kickstarter, you can still get in on the goodies while the pledge manager is open. Just click the link, then click the "Pre-order Now" button. Terrain is often quite adaptable to different scales, and I backed this one in the hope that at least some of these pieces look good in 1/72 scale. Do check it out!

Adaptability is what I had in mind a few years ago when I late-backed the "old" terrain Kickstarter I mentioned. Twisting Catacombs by Zealot Miniatures is a line of 28mm hard resin terrain. It's more expensive that the TerrainCrate pieces promise to be, but also a lot more detailed. I specifically chose the tiniest pieces they had, with the idea that they would more readily look the part for 1/72 scale. Of course I pride myself on scale pedantry, but even I know that when you're dealing with very small pieces, a few millimeters often doesn't make that much of a difference. But is that always the case? Let's compare! 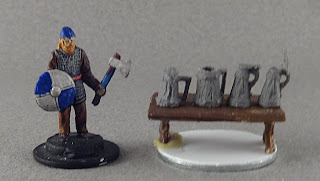 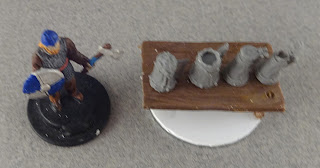 Let's start with these steins. Now if you look with even just a little care, these are too big to be 1/72 scale. The things are bigger than Sven's head, and while such vessels exist, they aren't typical. But if you're not thinking too hard about it, looking down on the table during...whatever gaming situation calls for tactical representations of covered beer mugs, I think they'll look fine. (The table, by the way, is a kit found in Strelets Napoleonic Camp set. It's a truly awful kit, with tons of flash and poorly-fitting parts, but it's the only 1/72 scale table of this size in plastic I'm aware of.)

These goblets and potion bottles are even better. The Linear-B nobleman in holding an in-scale goblet for comparison, and the smallest goblet is just about the same size. The potion bottles are supposed to represent tiny vials, so technically they are a bit too large, but they'd be microscopic in 1/72 scale and pose no problems as far as believability is concerned.

These food items, on the other hand, push credulity a little bit. The cheese and apple on the plate are big but don't seem big, and the pumpkins could of course just be large pumpkins. I can even buy the hamhock as a large specimen in 1/72. But the bread and the pie are just gigantic, and the cutlery is the size of Sven's axe! 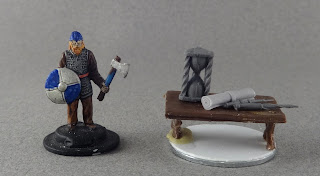 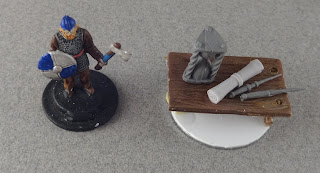 We see a similar issue with these desk items. The bladed implements are supposed to be augurs or letter-openers, but look like swords. Way too big for 1/72. Same goes for the scroll, which is longer than Sven's leg! It could maybe work as an objective marker, though. The hourglass is also very large, but perhaps believable as just a very large hourglass in scale.

The books are interesting in terms of adaptability to scale. The biggest is of course quite large, but old books could be all sorts of sizes; the largest ones could easily be large folios. And the smaller ones look just great for 1/72 scale. Books can be so many different sizes in the real world that models of books are almost scale-proof. (The two plastic pieces to Sven's left are harvested from various bases from Games Workshop's "Mines of Moria" set. The comparison shows the advantages that Zealot's resin casting has over plastic injection in terms of detail. I haven't had a chance to mention just how good these pieces look, as I think even my inept miniature photography shows.) 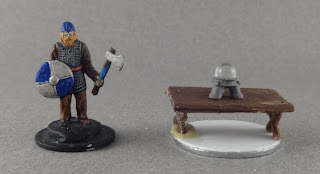 One more tabletop detail is this crystal ball, cast partially in clear resin. Totally believable in 1/72 scale. I always imagine crystal balls in movies to be a lot bigger than they often are, which I think it what sells this piece for me.

Moving to the floor now with these packs of supplies. Here's a case where the excellent detail of these pieces may be a disadvantage in terms of scale adaptability. In the aggregate they look fine, but if you look very closely, you'll see that some of these supplies look pretty darn big. That bow on the right is as tall as Sven! But on the whole, I think these are very adaptable.

Finally, some traps and switches. The trapdoor to the left is another "Mines of Moria" piece for comparison. The switches look excellent. Like the books, switches can be so many different sizes that scale matters a lot less.

I was prepared to wrap this post up with a little bit on terrain made for 1-72/20mm scale, but it turned out to be a bigger topic that deserves its own post. Coming soon!
Posted by 1Mac at 7:41 PM