Check out my sales page, now full of cheap 1/72 scale sprues suitable for fantasy, in addition to Reaper Bones figures and other goodies.

Spidermen! No not that kind, this kind:

Driders, or "drow-spiders," or spider-centaurs. Dark elves punished (or rewarded, depending on edition) by their spider-goddess Lolth with an aspect of her spidery form. One of those curiosities from D&D that's somehow stuck with fantasy gamers. Recall that these are mostly Alliance elves patched onto "jorogumo" figures from Arcane Legions.

Melee guys above. Archers and sorceress below; the sorceress bod is a Caesar elf. I worry that she looks either like Mrs. Santa Claus via the Brothers Grimm, or else a Star Trek bridge officer after a teleportation accident.

Side views, showing off the spidery livery this crew is wearing for some reason. Not the greatest freehand you'll ever see, but looks okay on the table.

Let's check out the larger drider figure, maybe an alpha drider, or possibly an avatar of Lolth herself. It's a Reaper Bones "Spider Centaur" archer figure. I swapped her bow arm with a Skink bit—should have either swapped both arms or else just trimmed the bow from her original hand. Looks kind of wonky. I also regret that her face is a bit obscure. Should have put more black around the mouth. I think it's not too bad overall, though. It's actually a smaller figure than you might expect, pretty close in body size to Sven the 1/72 comparison viking.

The spotted pattern on the back is loosely inspired by actual black widow spiders, which also inspired the general red-white-black colors of this squad. 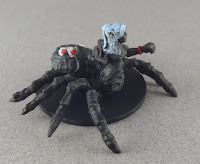 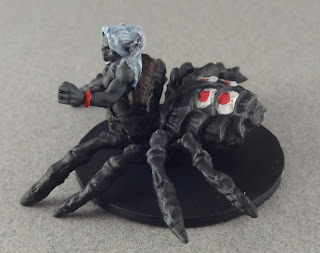 This was a fun project. I'm really pleased how the mods turned out on the 1/72 figures. Painting was a quick and dirty affair for the most part, but I like the overall look. They'll be a nice addition, or counterpoint to, the drow figures I painted a month ago.

Coming soon: demon legions, and other hellish beings!
Posted by 1Mac at 2:39 PM