Heartbreaker Next, plus blog blogging

I've gotten into D&D 5th Edition lately, aka "D&D Next," and since I find it hard to encounter a new system without messing with it, I've been doing a lot of homebrewing. So today's Heartbreaker breaks the thread of recent installments, as I'll instead show off some of what I've been doing.

But first! Those of you with blogs know of the carbuncular irritation that is referral spam. I thought it had largely subsided here at my humble micro-acre of the web, but like Hydra, or fever blisters, it always seems to come back. It appears that the only way I can filter it out is installing Google Analytics. I kind of hate to do this, since I believe it means installing cookies on visitors' computers. Rest assured if I do go down this path, I'm not trying to spy on you or steal your data. I'm just trying to make blogging a little less annoying for myself, and possibly do my part to put a stop to these guys. If you have concerns, do let me know.

Also! I may spin the Heartbreaker stuff off to a different blog in the near future. I know I said I'd keep everything in house, but if I'm going to do more homebrew stuff, I'd kind of like for it to have its own space on the web. I'll link to new Heartbreaker posts at this space if I start a new blog.

For now, new Heartbreaker stuff below the fold. But first, how about some news? A few upcoming sets have caught my attention. New producer "Linear-A," which seems to be the crew from "Linear-B" breaking off their relationship with Strelets, have an upcoming set, "Folk of Judea," with lots of great looking civilian figures. They've also announced a set of "Silk Road" figures. 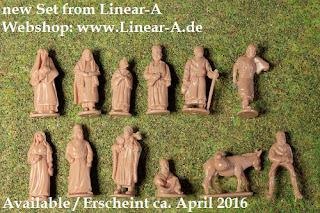 Strelets has another neat civilian set in the pipeline, "Norman Army Camp." Lots of interesting poses to look forward to.


This will probably only make sense to those of you familiar with D&D 5th edition, or at least D&D in general. I've been futzing with various class redesigns and have been sharing them at ENWorld. I've got two projects in the wild so far. "The Quarry Ranger," one of the endless parade of homebrew ranger class hacks homebrewers have emitted. And "The Hierophant," a cleric with the mechanics of the warlock class. Maybe I'll do some design diary type stuff here, but for now, please follow the links if they might be of interest, and feel free to leave a comment at ENWorld, or if not, here. I think you should be able to view the files without an ENWorld account, but if not, let me know and I can host them on GoogleDrive. Thanks!
Posted by 1Mac at 9:33 PM