IMPORTANT UPDATE (10/2013)!: After using this method on several miniatures, I've concluded that the solvent used in the Minwax dip is reactive to certain kinds of plastic, creating a sticky sheen that matte spray can't kill or contain. This includes the softer plastic used in Caesar Miniatures and Twilight Creations minis used here, plus the material used in Reaper Bones. The Italeri minis used for these zombies seems unaffected, as does the harder plastic used in Warhammer, Arcane Legions, Age of Mythology, and strangely, the soft plastic used by Hat.

I can't really recommend this method anymore. If you still want to use it, make sure it's on plastic that won't react by testing first, or find a way to seal the plastic before dipping (primer and paint isn't sufficient). I brushed on a coat of Pledge Floor Care Multisurface Finish (aka Future Shine) on all my affected minis, and it seems to have alleviated the problem significantly; it may also be enough of a seal to protect minis from The Dip.

I hope this tutorial was helpful to at least some of you. As I mentioned, I'm concerned by how dark and splotchy the dip is leaving my figures lately. It's a decent effect for zombies, but I used to get a much cleaner look from this method. I think the problem is that I was lazy about fully sealing the can of dip when I was done with it, which allowed for a degree of evaporation that has now left the dip too thick. I need to figure out a way to thin it with something that won't eat my plastic figures. I'd welcome any suggestions!

Last time, we performed some simple head swaps to create the Unpainted Undead. 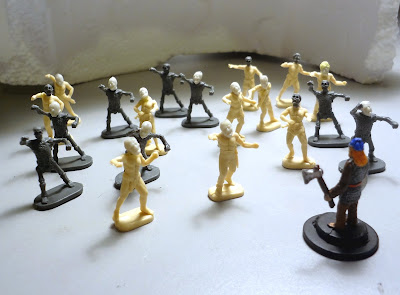 Now let's get them looking a little less unpainted and a little more undead. These are some pretty basic tips here, as my painting doesn't involve much fancy technique, but everyone needs to learn the basics some time.

1.) The first step is to wash the figures with a mix of dish detergent and water, scrubbing with an old toothbrush. This cleans off the mold release agent miniature makers use, which can keep paint from sticking.

As far as I'm concerned, the zombies are painted, but not complete. The final steps will take the figures away from their current flat, plastic look into something with a little more definition and detail. Hopefully these will be done by the end of the week (update: zombies are complete!); otherwise they'll be delayed just a bit. Either way, I'm please with how my zombies are looking so far.

World of Warcraft board game minis

Update: The Miniature Market sale is over, but I have a few of these minis for sale on eBay.

Miniature Market is offering its annual Spring Cleaning sale through May 17th 2013, with an additional 20% off all clearance items. I noticed that one such item was the Burning Crusade expansion for the World of Warcraft board game from Fantasy Flight, which is a trove of dozens of great plastic fantasy minis. Unfortunately, they seem to have since sold out, but you can find the expansion elsewhere (Amazon affiliates, for example) for under $30, which is still a fantastic deal.

Anyway, the sale made me think of the WoW board game minis I already have. The figures are 28mm, but a lot of them work surprisingly well in 1/72 scale. There was a time where you could get a lot of figures for the original game on eBay, but that seems to be less commonplace now. Still, the Burning Crusade expansion has one of each of the minis from the original game in purple plastic, so they can still be had.

The first set of photos are figures from the original World of Warcraft game, but again, they can also be had in the expansion. First, a couple of gnolls, a ghoul, and a murloc. I wish I had got more murlocs when they were available, as they make great human-sized fish-monsters in 1/72. The gnolls are arguably a bit oversized (MageKnight gnolls are a better fit, apparently), but gnolls are supposed to be a bit on the tall side. I plan on doing weapon swaps with some Warhammer skaven bits, like I did with the blue gnoll.

An ogre, a large demon Wrath Guard, and a Wildkin. The latter will make a perfect owlbear once I trim the antlers.

An Infernal, which will make a fine earth elemental, and a Drake, which is WoW-speak for dragon, I suppose. I like the poses on these: the Infernal gives the sense of how a giant rock monster would stomp toward you, and the Drake looks like it's regarding a smaller foe in irritation.

This next set of photos are of minis that are only in the Burning Crusade set. Here's a Yeti and a Fungal Giant, which is suitable for many sorts of giant monstrous creatures, fungal or otherwise.

Last, a Ravager, a giant undead Abomination, and an Ooze. The Ravager makes a nice generically Lovecraftian or demonic monster. I may want to modify the ooze so it doesn't have a face or arrows coming out of it, but as most ooze minis are pretty expensive, considering they're just amorphous lumps, I was glad to find it.

These are just some of my favorite minis from the World of Warcraft Burning Crusade expansion. It literally has several pounds of plastic minis, and if you can find it at the right price, it's well worth obtaining, even if you never play the game.
Posted by 1Mac at 1:37 PM 2 comments:

I promised an undead horde of some sort or another. Zombies will come later, but I started painting these guys and wanted to finish them. They're Caesar Miniatures undead figures, with just a few simple mods.

They're a little grimier than I would have liked. I use a battery-powered drill to shake off the excess dip I use for shading, and when it's not fully charged, it doesn't quite do the job. Still, they're supposed to be mouldering skeletal guardians of the ancient sort, so I shouldn't complain.

Other than that, they were pretty fun and easy to paint. Since they're mostly old bones, it was just a matter of spreading enough dull yellow paint around most of the minis, then taking care of the little details.