Check out this previous post for how I came up with these figures: they're mostly Caesar Miniatures undead with various headswaps. It's an idea I've seen a few other places, though the snakemen are my own invention. 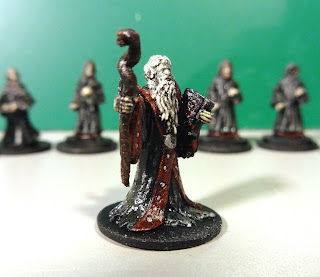 Here's the part of the blog where I complain about the dip: I've become convinced that something about the Caesar plastic resists the dip from curing. The bods are still a little tacky and shiny even after days of drying and layers of matte spray, while the heads are fine. The matte spray seemed to help, so I may try a hobby matte varnish.

We're doing some renovating in my hobby space, so it may be a while before my next project. I'm still trying to decide what to do next. Here are some ideas: hobgoblins (Caesar orcs painted ochre instead of green), gnolls (modded WoW gamepieces), a swarm of rats of various sizes (Reaper rats, Warhammer skaven bits, Castle Ravenloft pieces), or some larger creatures like trolls or ogres. Any preferences?
Posted by 1Mac at 7:08 PM 11 comments: 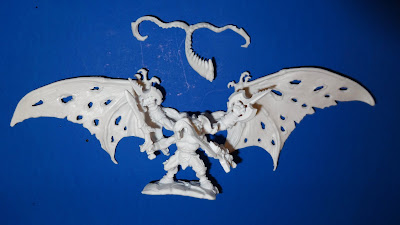 I didn't think I'd do it again, but I went and bought another lot of Bones minis on eBay, and as before, I'm putting most of them up for sale. Save up to half off MSRP. Check out my sale page for more info, or just go straight to my seller page. Happy buying!
Posted by 1Mac at 1:05 PM No comments:

The nearly-ultimate guide to D&D halfling and gnome miniatures

As I've previously mentioned, I have an interest in adapting D&D miniatures for my own 1/72 fantasy minis collection. Maybe that's why you'll find this post interesting, or maybe you just want to know how big these minis are. The original collectible D&D miniatures line spanned several years, after all, during which time the idea of scale proved to be quite flexible. Maybe you are starting your D&D minis collection and crave consistency in scale, or you just want more information before you start buying.

Whatever your reason, I hope you find this post useful. I'm missing a few halflings and gnomes, so my collection isn't entirely comprehensive, but it's close. I've also included a few halfings and gnomes from other miniature lines.

Sven the 1/72 scale comparison viking is on the right side of each shot. I've also included a 1/72 scale Caesar Miniatures sorceress on the left, as Caesar minis are just a bit smaller, and I thought the further comparison might be useful. Minis are grouped by size in four pictures (note that I'm going by presumed full height, even for minis that are crouching), and I include the name and year of production for each mini. I'm not including the particular release for each mini, as it's not particularly relevant to the secondary market, but the production year ought to show some interesting trends. Click images to enlarge!


You can see that for halflings, the production year centers on 2003-2004 for group 1, 2005-2006 for groups 2 and 3, and 2007-2008 for group 4, especially the ones standing upright. Gnomes follow a similar trend, though they started larger. Of the gnomes and halfling I'm missing, I would guess that the halfling ranger belongs in group 1, Nebin the gnome illusionist in group 2, and Ulmo Lightbringer in group 4 (I'm open to correction!).

I'm also interested in other D&D minis for 1/72 scale fantasy gaming, as I show here. Here are some more recent acquisitions of mine that I think work particularly well for this purpose.

D&D miniatures aren't the most cost-effective way to build a 1/72 fantasy mini collection, but they are great for certain character types that aren't readily available in this scale, such as spellcasters, rogues, and female fighters. It also turns out that many are suitable as 1/72 halflings. I've been thinking of using 15mm miniatures as halflings (like these guys), and I'd be interested to see how they'd compare, but that will be a later post.
Posted by 1Mac at 11:29 AM 2 comments:

It sounds like something Velma from Scoobie Doo would say, but it's actually an apparently failed toy line that I found on clearance at Target. They seemed like something that could work for my peculiar purposes, so I took a chance and bought a couple packs.

Zinkies are made from a very squishy, rubbery material, and they aren't terribly detailed. I have no idea how they'd look if painted, or if they'd even be able to hold paint without cracking. I wonder if there's a way to make them less squishy somehow. If anyone has any suggestions, I'd be glad to hear them!
Posted by 1Mac at 9:15 AM 2 comments: