Man, did these guys ever take a long time to finish. These Warhammer figures have way more fiddly details than the 1/72 minis I'm used to, even though they're both about the same size in this case. Still, despite a few reservations, I'm pretty proud of how my 1/72 lizardmen turned out. Partly for that reason, and partly because I finally figured out how to activate micro-mode on our camera, you're getting a lot of photos today.

Things that went well: I'm quite pleased with the basic color scheme. Orange-and-purple was perhaps not the obvious choice, but it works and is quite distinctive. I'm also generally proud of my detail work, especially the faces. I haven't had minis that stare back at me quite like these do.

Things that worked less well: I'm developing a love-hate relationship with The Dip. I thinned it with some Naptha thinner, and it more or less behaved the way I wanted. But it was probably a bad idea to dunk these figures in the dip directly, with all their splayed limbs and crevasses. The sorcerer and archers are single-piece figures with more compact poses, so it was easier for me to wipe off the excess dip; it's not surprising that The Dip had the best effect on them. If I had applied The Dip with a brush on the others, they might have looked less splotchy. The Dip I use is also toxic, messy, difficult to clean, and apparently takes longer to dry than I thought (by the way, thanks to the TMP guys for your tips!). In the future I may try something else, like water-based floor polish mixed with paint or ink.

The lizardmen were a huge effort to assemble and paint, but I really do like the overall results. I'm still very glad my next project will be dudes in simple, monochromatic robes.
Posted by 1Mac at 7:48 AM 2 comments:

My sale is going pretty well, but I still have lots of Reaper Bones, WoW boardgame minis, and other cheap minis for sale. Check out my sale page for more information.

I'm usually purely a 1/72 collector, as far as human-scale minis goes, but since I temporarily have something of a warehouse of all sorts of miniatures, I thought I'd take the opportunity to take a snapshot for the purposes of scale comparison.

These are a little shorter than shown, since they're a few millimeters away from the backdrop, but this should give a relative idea of different scales used in fantasy gaming. To the left is a Reaper Miniatures figure, one of the new Kickstarter Bones. Even though they're advertised as "heroic 25mm," you can see they are quite a bit taller. To the right is a D&D Miniature, from the Dragoneye series. D&D minis are a bit inconsistent scalewise, but this guy is fairly typical.

Continuing to the right is a game piece from the World of Warcraft miniatures game. He's actually about 25mm from foot to eye; I think this puts him in about the same scale as most Games Workshop minis (I could be wrong, though). Finally our old friend Sven the 1/72 comparison viking, who is about 25mm from foot to scalp, making him a bit shorter than the WoW figure. Not shown is an example of a 15mm figure, for the simple reason that I don't own any :). It would be about 1/2 to 2/3 the size of Sven, depending on the manufacturer.
Posted by 1Mac at 11:27 AM No comments:

Cultists, and other figure mods

Painting miniatures is great, but sometimes I need a distraction while still doing something hobby-related. Sometimes I need something a little more instantly gratifying than what painting can give me. I'm finding that modifying figures to create something new gives me exactly this: it's creative, I get results I like very quickly, and given that not everything I want is in 1/72 (the preferred scale of this blog), it's often necessary. I describe the basic technique I use here. Of course I still have to paint the little dudes eventually, but that comes later, usually after I finish the concurrent painting project.

Let's start with some evil cultists. I got the idea from Plasticgeneral's and El Senyor Verd's blogs. The bodies are Caesar Miniatures undead, while the heads are from Zvezda peasants or HAT/Airfix Robin Hood figures. I decided to completely carve away the scythes the bodies were holding, and though it looks a little rough, I think it will look okay once painted. I also tried some reposing with the arms, and I may do a little more so it doesn't look like the entire sinister congregation is holding invisible polearms. You can see the yellow blobs of Milliput I used to hide the seems in a few figures, but for the most part everything lined up surprisingly well.

Of course, everyone knows that if you join an evil cult, there's a fair chance you'll wind up turning into a degenerate snake monster (or evil fish beast, or host to an eldritch squid god). These guys got head swaps with Arcane Legions sta figures. The middle guy also got a hand swap because I thought he ought to be holding the nifty snake staff the necromancer-looking guy above has. The hooded fellow on the left (possibly a snakeman in cognito) has a head from a Micro Machines jawa miniature.

Here's a picture I took of some body swaps I did months ago. You can see the original figures and the resulting swaps. We have a Caesar Miniatures knight, an Arcane Legions lion-rider, a CM elf, and an AL jorogumo (spider-monster). The idea for the elf-jorogumo swap was to make a drider, a classic dark-elf/spider monster from D&D. You can see the glob of wood glue I used to crudely fill in the gap between the two halves.

As I was messing around with the more recent headswaps, I took the opportunity to fill in the seams a little better with some Milliput. I also did a few more headswaps using Caesar Miniatures goblins. The goblin wizard on the left has a jawa body (its head went to the hooded cultist above) (P.S., my wife mentioned that the goblin wizard looks like Yoda, who when you think about it basically is a goblin wizard). Next to him is a swap between two goblin figures to make a goblin chieftan. Since I didn't want to waste the leftover bodies, I added some Greek villager heads from Age of Mythology minis to make some halfing barbarians: They aren't quite as crude and radioactive-looking in person.

I'm also messing around with some conversions for a demon army, but that will probably be a later post. 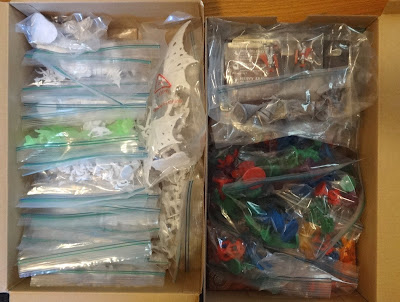 So in a fit of eBay-induced enthusiasm, I now possess around 350 cheap plastic fantasy minis in heroic 28mm scale, and I plan on selling most of them. I'll eventually put these on eBay, but I thought I'd offer them up here. I'll sell most of the Bones miniatures for half off MSRP, or less if you buy them in presorted lots. I also have a few large Bones for sale, including Rauthuros the demon and Boerogg Blackrime the frost giant.

For the WoW figures (great cheap gaming minis which I discuss here), I'll sell the large figures and heroic minis for a dollar a piece, or two for a buck for the smaller monsters. I also have a few Arcane Legions and D&D Miniatures I'd like to sell, plus some leftover toy cavemen figures that can be used for ogres, giants and the like.

See what I have for sale here, along with instructions for how to buy. Enjoy!
Posted by 1Mac at 2:04 PM No comments: