Since I'm currently occupied with other projects, I've been thinking of posts I should feature until I have time to begin hobbying again. One idea is Old Stuff: cheap fantasy mini projects I completed before I started this blog, which I may have featured elsewhere but not here. And since the Black Friday/Cyber Monday sale at Miniature Market means their already fantastic prices on Arcane Legions are even lower this weekend, I thought my centaurs would be a good place to start.

These guys are of course Arcane Legions figures. The archers and the spearman in the middle are Egyptian Boosters, while the other figures are Egyptian Cavalry. Apart from the sable centaur ("Achilles," apparently), these aren't the original heads, which wore Classical-style crested helmets, like these:
Clever idea for a sculpt, but I decided I liked the wilder look of the more classic, uncivilized centaurs I remember reading about from Hercules and other legends. The solution was a bunch of head swaps with Esci/Italeri's out-of-production barbarian figures, complemented with a generous coiffure of fabulous Milliput-sculpted hair. I don't have many WIP photos of these, but this shot might give some idea of what the process was like:
Finally, some lineup shots with Sven the comparison viking, looking somewhat out of place but nonetheless in scale with all the horse-dudes.

You can see how I was limited by the small number of poses available, but I think the shot at the top of the article shows how the headswaps combined with the variegated paintjobs lend more variety than one might expect.
Posted by 1Mac at 11:07 PM 4 comments: 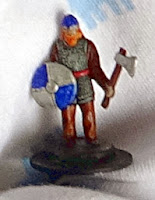 Sorry for the lack of updates. I've been working on a big miniature project, along with my wife. It's larger scale than I'm used to, about 1: 3 1/3. The proportions are a little squat and cartoonish, but I think he still has a certain charm. 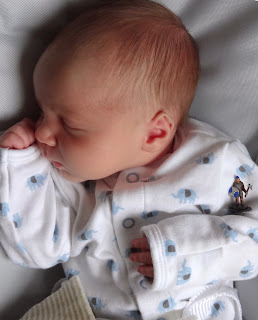 This little guy is probably going to take some additional time, so there may be a shortage of new projects featured here, but I have a few ideas for future posts, including some posts on older projects, and "Ask the Cheap Fantasy Miniaturist!" Ask me about where to find cheap fantasy 1/72 minis, and I'll do my best to answer.
Posted by 1Mac at 5:19 PM 4 comments:

Email ThisBlogThis!Share to TwitterShare to FacebookShare to Pinterest
Labels: personal

I'm a social media luddite, and would rather that this blog be a vehicle for sharing interest in my hobby, not my personal life. So I don't appreciate the way Google has been pushing Google+ into all its products and services. That's why I've been remiss in including more easy-to-use follower features, even though I'd like to make it easy to follow my blog. Luckily, thanks to this helpful tutorial, I've figured out how to resurrect Google's old, un-Plus follower gadget, which you can see on the right. If you prefer, you can still follow via email or subscribe via RSS feed using the gadgets at the bottom of this blog.

Out of curiosity, if you are a regular reader, how do you keep up with my blog? RSS? Bookmarks? The blogroll on your own blog? Posts I make on TMP or elsewhere? Haruspicy?

Also, may I take this opportunity to introduce this 1/72 -20mm fantasy Google+ page? Obviously it's not my doing: I found out about it when the guy who started it put up a very kind and flattering post on my ENWorld thread. Right now it's largely just him with some pretty cool stuff and ideas, but it's also worth a visit to see that Kris Richards is still painting 1/72 figures. Unfortunately I can't figure out how to participate without violating my precious anonymity, but hopefully it develops into a great place for fellow 1/72 fantasy enthusiasts (a niche within a niche if there ever was one) to meet and share ideas!
Posted by 1Mac at 11:56 AM 4 comments: