Hannants surprised me by shipping my recent order with them in just a week, so I have lots of interesting swag to show off. Most novel are the Amazons that Alliance just released. A shortage of female 1/72 minis has just been relieved, but is it worth it?

I'm judging these safe-for-work, because after all they are unpainted small-scale plastic figures. But there's definitely plenty of bare-chestedness going on in these figures, to an arguably gratuitous degree. Yes, yes, there are certainly precedents for nude figures in this scale, both male and female, and I don't want to gainsay anyone's tastes or preferences in this regard. But maybe you can see what I mean here. Some of these costumes, if not quite PG-13, make sense for a race of warrior women, but others are rather more, shall we say, eye-catching that practical for life on the battlefield. I haven't shown the backs of these figures, which are even more ridiculous: either these outfits have very, very tight breeches, or they are quite drafty. In other words, it's not just that these figures are too sexy; in trying to be sexy they've turned out a little bit goofy as well.

It's too bad, because the sculpting is actually pretty well done. These Amazons are a bit on the tall side, but not too tall; the poses are lively even if a bit flat, and there's lots of variety. Some of these are obviously suitable for quasi-Greek campaigns, but others are more generic. Besides, the crests of those Greek helmets can easily be snipped for a less Hellenistic look.

Anyway, I promised pics. There are currently two sets, a foot set and a cavalry set. The first is 40 figures in 10 poses, the second is 12 unique figures, plus 10 horses (not the cool mounts shown in this preview, alas!). Here they are:

I'm perhaps letting my focus on the whole goofy/sexy design of these figures make this review sound overly negative. Really, they're pretty good figures, and it's great to have more female figures in this niche-in-a-niche of a hobby. I just wish the focus was more heroic and a little less gratuitous. Still, it will be an interesting project to mod these a little more to my tastes.

Drow! You stabbed me!

An extraordinarily busy March and April meant that I put off painting the dark elf figures I put together months ago. But they're done now!

Pretty simple painting; a lot of grays with some purple, which looks more washed-out in these photos than in person. Because of the dark color scheme, I did a lot more drybrushing than I usually do, with light gray on the clothes and pure white on the face and hair. These are pretty typical drow colors, though I suppose the blue hair might be a bit unusual. I think it works though; with the heavy drybrushing, the blue almost looks like a wash, so it's more of an accent color.

Below are the sword guys. The figure on the left is an unmodified Caesar elf. The rest are Alliance elf heads on various bods, mostly Caesar. The female fighter has an Arcane Legions body, while the one in the middle has one from a Hat Celt leader.

Next are the archers. These are mostly unmodified Caesar elves, though I swapped the "conehead" elf head with an Alliance head for the figure on the left. The running archer has a bod from a Hat "Robin Hood" figure. 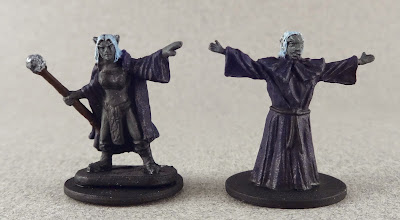 Here's Sven the 1/72 comparison viking with Salogel of the One Inch Guild, with his counterpart from the Realm of Lolth.

I decided to finish these guys first before working on the driders, also featured in the first drow post. They're next!