[RPG fans: Don't forget that I have a stand-alone RPG blog! I've been putting up a few new posts lately. Some are reposts from when I did RPG blogging on this blog, but there's also new content to check out. Please do so!]

One could say that I've painted a few minis, but I was never too satisfied with how I was storing them. I have a few drawer sets atop my painting table, including a mini hardware set of the sort intended to store screws and washers and things like that. It stores most of my 1 inch high minis quite well, and each set can live in its own somewhat portable drawer, but I have a few problems with this system. For one, it's not a display solution; it hides my completed projects instead of showing them off. More importantly, these drawers aren't at all airtight. That's not a problem for bolts and nails, but for minis it means they get quite dusty. So over the past year I've been leaning toward a better way.

Let's start with my new approach to storage trays. 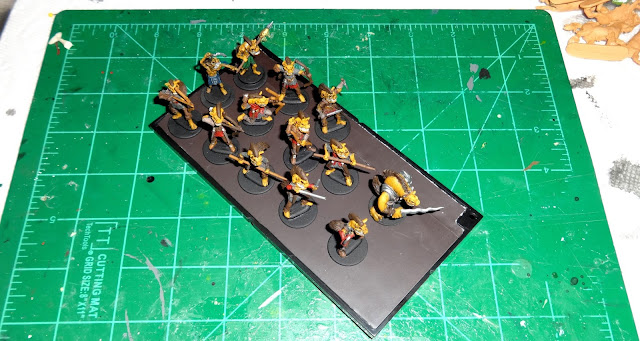 Special points if you know what you're looking at. It's an Arcane Legions movement tray, of the sort that I've accrued in a plethora. I cut and superglued a bit of magnetic sheeting to fit, the kind designed to let you print your own refrigerator magnets. The magnet is strong enough to keep my metal washer bases in place so long as they aren't rocked too hard. I can even turn some of my lighter figures upside-down and have them stick for a bit. This way I can keep my little troops together and move them all at once.

But I still needed a place to put them all. 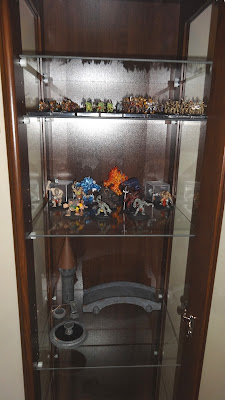 It's an Ikea display case, dubbed a Hemnes, to be specific. It was actually a Father's Day present from last year that I managed to finally build in the fall. It's a very nice piece, though I admit that the price tag is not exactly consistent with the Cheap Fantasy Minis ethos. I considered the cheaper Detolf that is often mentioned for mini storage, but while I liked the unobstructed all-glass look, it has a number of gaps on the edges and is not at all air-tight. If I wanted a dust-free solution, I had to splurge a bit. I'd like to upgrade with a Dioder lighting kit, and possibly some more shelves, but it looks pretty good for now.

Let's see how everything looks up close. Sorry for the intense flash on these.

Regular CFM readers may realize that the three above shots do not represent everything I have painted. I need to make more magnetic trays and migrate everyone else to their new home. Ironically, that means that all those Arcane Legions movement trays I've collected, which were previously an albatross, are now in hot demand at the 1Mac household. Seriously, if any readers have any they'd like to be rid of, drop me a line!
Posted by 1Mac at 7:12 PM 2 comments: