I finally painted something this year!

Bandits, or peasant partisans, or village militia, etc. They're a mix of Zvezda peasants and Hat/Airfix Robin Hood figures with a few mods, as I first showed off back in August (ugh). They look pretty good as a group, but let's take a closer look.

Melee dudes. You can see that the Zvezda figures are similar in style but noticeably taller. My wife asked me one time if I ever tried painting non-Caucasian figures. I pointed out that most of my figures had green skin, but she had a point that all my humans so far were people of pallor, so I tried a darker skin tone on some of these. 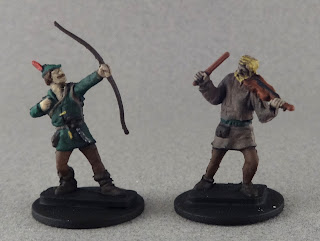 The Lord of Loxley himself, plus a fiddler, converted from a sitting Imex pioneer figure with some legs pilfered from one of the Merry Men. I'm pretty pleased with how seamless it looks.

Ranged units. The Zvezda slinger and archer with the mondo longbow absolutely tower over their Airfix counterparts, alas.

I've got a few more post ideas lined up, plus the guards I started at the same time I started the bandit project to finish up. Stay tuned!
Posted by 1Mac at 10:17 PM 9 comments:

A few years ago, the hotness in fantasy minis Kickstarters was Twisting Catacombs, a series of resin terrain pieces for dungeons and such by Zealot Miniatures. They are 28mm scale, but I was curious if some of the smaller pieces would look okay in 1/72, the official CFM scale. They had all kinds of fiddly bits like food and tankards and bottles that I thought would look, if not exactly in scale, close enough to work at the table. I was a very late backer, and with the vagaries of Kickstarter fulfillment, I only just got my order a month ago, and have been meaning to take some comparison pics.

I have not done so :(. I intend to, but simply need to take the time. The reason I'm mentioning it now is because of another 28mm fantasy terrain Kickstarter that's still taking backers. TerrainCrate is a project by Mantic Games, whom I didn't realize, in addition to aggressively competing with GamesWorkshop for great justice, was also quietly building a line of plastic terrain pieces. Obviously they're intending to blow up the line, marrying plastic and terrain for value, much like what Reaper Miniatures did for plastic and mini figures years ago with their Bones line. Anyway, the "crates" of terrain look like a fantastic value, and there are still a couple of days left to back the project. It's fairly certain that not everything will work with 1/72 pieces, but I'm hoping many of these plastic pieces might readily be modded or adapted.

PS: Speaking of Reaper and Kickstarters: Bones IV is coming! Reaper won't start it until they've finished fulfilling the last Bones Kickstarter, but you can check out this gallery from a ReaperCon attendee to get a preview. It took me longer than it should have to realize the hut had legs (as described in legends).
Posted by 1Mac at 11:42 PM No comments: 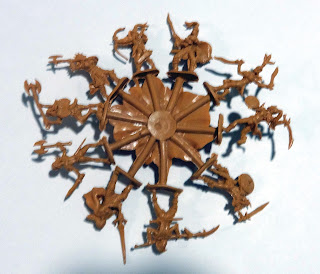 Long time, no blog, but I finally got around to updating my sales page. Check it out, not only for new 1/72 sprues, but for board game pieces from Battlelore 2nd Edition, Shadows of Brimstone, Arcane Legions, Temple of Elemental Evil, the World of Warcraft boardgame and lots more. I'm also selling a few old board games and RPG books that are worth a look. Plus, Reaper's Bones III Kickstarter should be shipping some time later this year, and I'll have a lot of stuff to add when it does!

I've actually had time to paint a bit lately so hopefully I'll have an actual finished project to share soon. I've also been acquiring a lot of minis lately (hence the sale) that I'd like to show off soon. Thanks for reading!
Posted by 1Mac at 8:34 PM No comments: