Struggling With My Demons

See the end of this post for more about my reader poll. Also, check out my sales page, please!

I finally got the demons done, about a month later than forecasted. It's not that they were especially hard to paint, though it did take me a while to settle on a color plan (short version: red). It's just that Real Life, dread foe to all hobbyists, reared its head. No one big thing, but lots of little things.

Again, these are mostly Caesar knights with 15mm demon heads from CP models. Tails are dramatically bent florist wire. The middle guy above has a goblin head, also from Caesar Miniatures.

Another set. I think the metal armor looks good for "demon legionnaires." The red fabric/quilted stuff looks fine, though I'm not sure how diabolical it looks.

The two big guys above are Twilight Miniatures demons, with one head swap and another head reposition. The female demon is a Caesar elf with bat wings taken from a Safari Ltd. "good luck mini."

Comparison with Sven. There are a lot of different materials used in this project: plastic bods, metal heads, wire tails, rubber wings. I wasn't sure how well paint and primer would take to all these, but they seem pretty cohesive. I'm particularly impressed with how well the CP heads work with 1/72 models, despite being made for smaller scale minis. 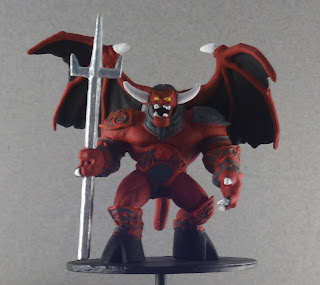 Uncompleted is this big guy, a World of Warcraft board game piece with a pitchfork from a LotR Mines of Moria troll. The trick is the red detail, which I somehow thought could be painted in its own color. The fact that it's raised makes it a little easier than you might think, and I know any blackwash I use can hide some of the sloppiness. Still kind of a big job, so he'll have to wait a bit longer.

So I'm going to run my poll a little longer. Thanks to respondents so far. The majority seem interested in the idea of RPG rules related posts, but there is a substantial minority that is uninterested. This suggests maybe starting a new blog, except most of the "yes" votes want to see them on this blog. So maybe I'll start a new blog but be sure to mention new posts in this space.

Anyway, the poll is below again. Please answer if you're a regular reader and haven't done so yet. Also, sales page!

(The poll should be embedded above, but if not, it should be found here.)

To pass the time until I finish painting those darn demon minis, I thought I'd share some miscellaneous items. Please read to the end, as I've been toying with some new blogging ideas I want to gage interest in.

First, a reminder to please check out my sales page. Current items for sale include lots of D&D brand minis, mostly unpainted from the Temple of Elemental Evil board game, but a few prepaints as well. There are also still a few Reaper Bones available, plus some 1/72 figure sprues and a few other items.

Plastic Soldier Review has a very helpful new post about 1/72 figures in board games. Lots of interesting finds. "Risk 2210" is an interesting find for those looking for sci-fi figures in 1/72. Also, I didn't realize that "Age of Mythology" publisher Eagle Games' "Defenders of the Realm" was 1/72; I just sort of assumed it was 28mm. This pick seems to confirm it, though.

Speaking of board games and scale comparisons, I'd been meaning to share this tidbit about BattleLore and 1/72 compatibility since the new edition of the game came out.

[Update: I knew I forgot about something. So I stumbled upon this blog post from last year about GAMA, a game publishers trade show, and found this image.

Look familiar? I asked the folks at Twilight Creations about it, and they said they hoped to have these bags on their webstore soon, and in distribution by the end of the year. Something to keep an eye on, especially since the Bump in the Night board game is out of print and a bit hard to find.]

Finally, an idea that I've had for blogging. I know that many of you readers aren't necessarily gamers, but I used to mess around with rules and hacks for roleplaying games. I've been thinking about some of those rules lately and would kind of like to share them, but I don't know if there would be any interest, hence the poll below. d20-ish OGL fantasy, to give an idea. If enough of you answer honestly, it would give me an idea of whether or how to proceed, so I'd really appreciate it. Thanks!

(The poll should be embedded above, but if not, it should be found here.)
Posted by 1Mac at 9:48 PM 4 comments: 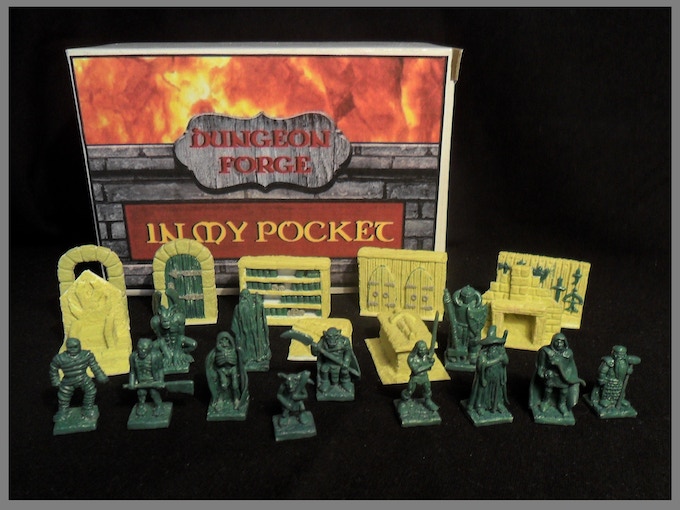 Via CFM reader Carl is this intriguing Kickstarter. Dungeon Forge In My Pocket is an attempt to make a truly portable dungeon crawl for fantasy RPGs. It sort of reminds me of Rob Dean's Portable Fantasy Game project, and like PFG it relies on smaller-scale minis to accomplish it's goal.

Which scale is a bit of a mystery if you go by the Kickstarter description, but I asked Raúl the designer, and he kindly responded, "The height of a miniature of a human is fed up 20mm." Sounds to me like he means 20mm from toe to crown, around HO scale, which as we learned last month is a bit smaller than 1/72, the preferred scale of this blog. On the other hand, the dwarf is 15mm tall according to the Kickstarter page, while the minotaur (a stretch reward) is 25mm. As it happens the 1/72 dwarves from Caesar Miniatures are also around 15mm, and a 25mm minotaur would look human sized in 1/72. So while the humans may look a little small, there's plenty of potential for adaptability if you want to use them for 1/72 fantasy gaming.

You can see that the full set includes minis, dungeon tiles, and terrain, all cast in resin. The figures I'm a little ambivalent about; they seem a little static, like they were chess pieces or something (Carl says the style is reminiscent of the classic board game HeroQuest, so that may be why). Plus they are mostly for figure types I already have in 1/72. The terrain, on the other hand, is excellent; a variety of great pieces, all seldom seen in 1/72.

12€ (about $13.50 plus shipping) gets you the figures and terrain shown above, plus some duplicates. To get the tiles, case, and stretch goals, you need the 36€ level (about $40). That may wind up being a really good deal, depending on what future stretch goals are like.

The project comes out of Spain, for what it's worth. This is the designer's first Kickstarter, but he's already met his modest funding goal, and he already has prototype models of everything instead of 3D concept art, both of which are good signs. There's a week left of fundraising, so there's still plenty of time to jump in!
Posted by 1Mac at 3:09 PM 2 comments: