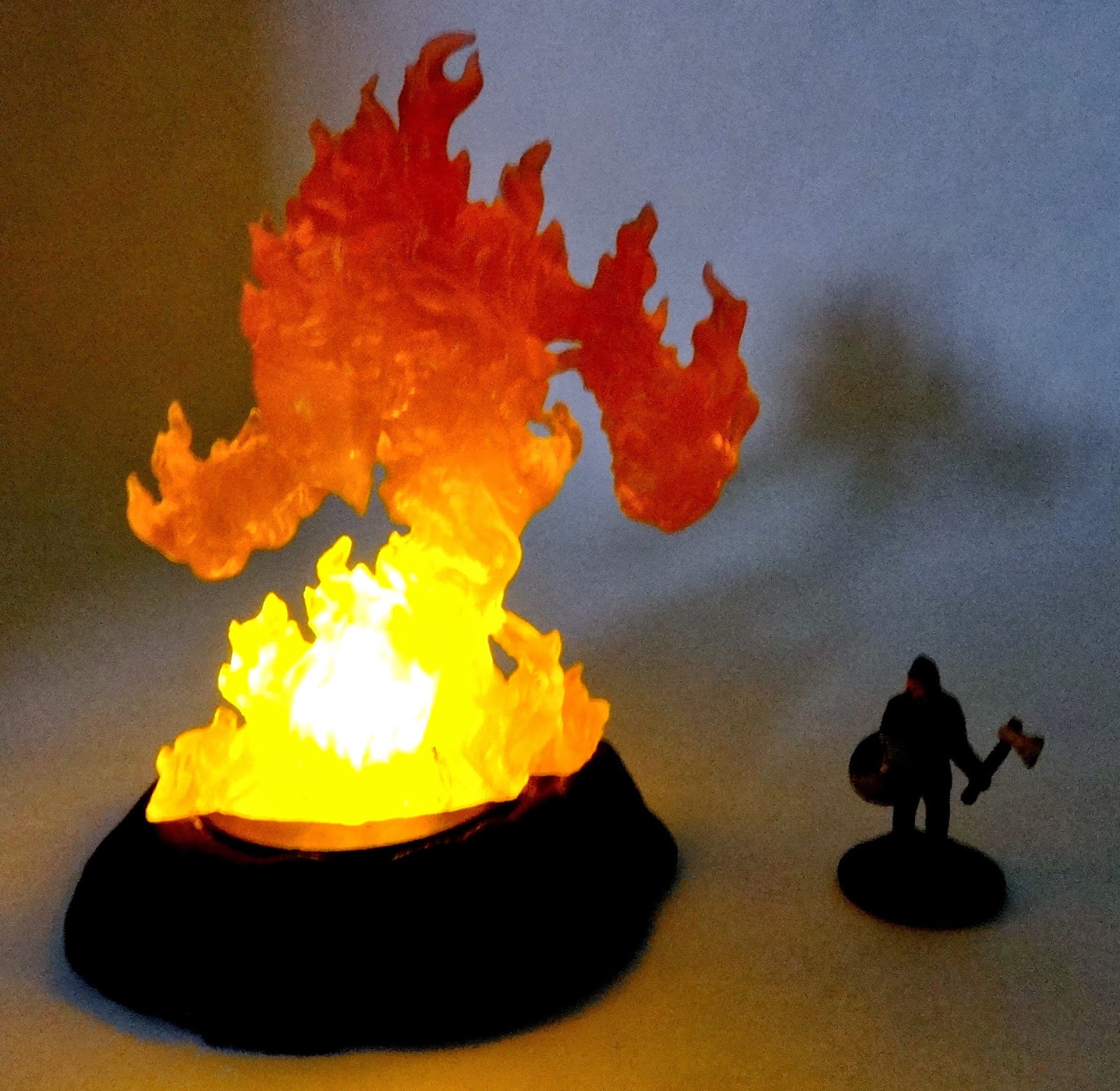 This big guy is a clear plastic Reaper Bones Large Fire Elemental. I haven't painted it yet; what you see is the result of "real" flickering fire action, effected by a cheap, disassembled tea light inserted into the mini. It's a cool trick, one that I've seen elsewhere many places. Frankly you could just as well skip this little tutorial and check out the much better one at Chris Palmer's excellent "All Bones About It" painting blog. One thing I tried to do was make the tealight accessible in case it ever needed replacing, so if you're interested in what I did differently, feel free to soldier on!


I still need to figure out how I want this critter painted. Chris has some excellent ideas. I'm pleased with how it's going so far though; I can take everything apart and reassemble with little effort, and it's already all glowy and cool. And glowy and cool is about everything I want out of a fire mini.
Posted by 1Mac at 7:27 PM 3 comments:

So this is the rather involved and curious project I'm undertaking. I recently thought to myself, why not buy all the D&D Adventure System board games, replace the minis with 1/72 equivalents, and sell the rest on the secondary market? This sort of thing only begins to make sense if you are already collecting 1/72 fantasy minis (and who doesn't?). A few reasons one might be interested in this: you do what I did and buy the full game, keeping the minis you like and selling the rest. Or you can buy all the game pieces separately at places like Auggie's or Hoard o Bits, and get cheaper minis for the game as shown here. Or maybe you just like to see what minis can be found in scale. To be honest, this last point is also part of my motivation: it's a bit of a challenge to see if I can recreate these game minis in my scale of choice, and gives me some direction when considering what minis to seek out next.

This will be first of a series of posts. I'll start with the monsters from Castle Ravenloft, the first D&D Adventure System game. I'm excluding villains for a later post. I'm also excluding the rat swarm minis, as they also work for 1/72 scale, so I have no interest in replacing them. These shots include the original mini and their smaller scale replacements for comparison.

I may feature monsters from other games before I undertake villain and hero minis. They're doable, but may take some work. At any rate, I hope this feature will be at least somewhat interesting, and not entirely peculiar or esoteric.
Posted by 1Mac at 4:09 PM No comments:

Like these figures, but don't need 90 of them? Check out my sale page, where I'm selling sets I don't need.

Okay, zombie animals weren't exactly something that was on my bucket list, but when I found out that Twilight Creations had a new expansion to their popular Zombies!!! game, and that it had a ton of animal minis in six different poses, I had to check them out. Twilight Creations usually only has one pose per set, but when they have multiple poses and sell them cheap, they're worth a look. They look like this:

Let's ignore the zombie-ness of these figures for a moment and consider them just as animals. Here are some real-life comparisons between these animals and humans, courtesy of National Geographic:

Apart from the large hyena—which could be adapted as a bear—, you can see that these figures are actually a pretty close match for 1/72 scale. That's actually great, because 1/72 scale wild animals are pretty hard to find. I figure a little bit of Milliput or even wood glue in the, um, exposed areas will suffice to make these look like normally vital megafauna. And if you happen to need a 1/72 scale zombie chimpanzee, you'll have plenty.

Comparisons with other animal figures:
The figures themselves are actually of a harder plastic than the usual rubbery Twilight Creations material, and are quite durable. I paid under $18 for the game, and with 90 minis included, that comes to under 20 cents a mini. Not bad if you need a ton of zombie animals or don't mind converting them into un-undead beasties.