Hey all, before we begin, I thought I'd officially announce something a few of you have already noticed: I've spun off Heartbreaker to its own blog. Now I've got a place all on its own to share my quite unqualified thoughts on RPG design and homebrewing. I've already got a firecracker of a screed posted by way of introduction, followed soon by some hopefully more measured thoughts. I've got a link on the sidebar, so you can always see when there are new posts just by visiting this page. Or feel free to follow the new blog!

Today's topic: water. As though two hobbies weren't enough, my dad and I have started to build a model railroad. Ostensibly it's for my son, but let's not fool ourselves: this is a hobby at least as much for the adults as for the kid. We actually were model railroaders when I was growing up, and in fact my love of figure painting comes from painting HO scale Preiser people for our layouts. Anyway, this time we're trying a few things we've never tried before, including modeling water. Prudently I decided to make a little diorama to give making water a go, and it occurred to me that miniaturists and wargame terrain makers who read this blog might get something out of my experiment.

The key product is Magic Water, a two-part resin specifically designed to model water. I bought my package at a local hobby shop, and you can also order direct from the manufacturer. It's $35 for the regular size (a smaller size is available for miniaturists), and the guy who makes it is the only distributor, so you aren't going to find a lot of discounts. But it won't shrink or yellow, dries clear, and doesn't eat styrofoam, which makes it superior to similar two-part resin products.

So here's how it went: 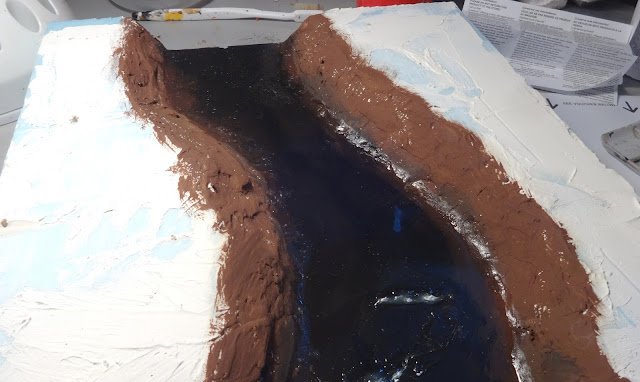 If you're wondering about the white ridge in the middle, that's my bad attempt at modeling rapids; more on that later. You can see that the rest does indeed dry clear and looks very wet and watery.

I made a 1 foot square base out of two layers of extruded styrofoam. I used a box cutter and a dull breadknife to cut the foam and shape the terrain before gluing the two layers together. I used joint compound to seal everything; this was a misadventure, as the compound had gone bad, something that I didn't realize could happen. So you know, if joint compound smells like rotten eggs, don't use it, and throw it out right away! In addition to being gross and perhaps dangerously unhygienic, this wasn't even entirely necessary, but at the time I didn't realize Magic Water wouldn't eat foam. It did serve the purpose of sealing the gap between layers, something that a bead of clear caulk would also accomplish. This is necessary because Magic Water is very devious about finding any gap or cranny to flow into while it cures.

This photo show how profound the illusion of depth can be with this product, as the layer of Magic Water is only a few millimeters thick. I painted the shore and part of the riverbed brown and used black for the rest, blending together the two colors along the outer edge. This does a good job of simulating shallow water near the banks and deeper water in the middle of the river.

I mixed the two parts together in a disposable cup as per instructions. Mixing is pretty tedious; the instructions say to mix three times, five minutes at a time. I dammed the edges of the river with green painters tape (which turned out to be wholly inadequate; next time I'm using perforated metal plates and clear caulk. Be sure to do your pour over some kind of drop cloth in case of leaks!). I then poured along the the middle. Magic Water is self-leveling, so you don't need to do anything to spread it around; in fact you should ensure that your pour surface is completely level so it doesn't pool. You may see some bubbles; I believe the instructions say these will pop on their own, but you can also pop them by blowing on them gently with a straw while the resin is still liquid.

The instructions say the resin will cure completely in 24 hours at 70˚ F. My setup was in a basement near a door during a spate of somewhat chilly weather, so it took more than twice that time. Do wait at least 24 hours before seeing if it cured, and use a toothpick or other fine instrument to test it. Fully cured Magic Water is totally hard and not at all sticky, and you don't want to handle it before it cures lest you leave fingerprints. 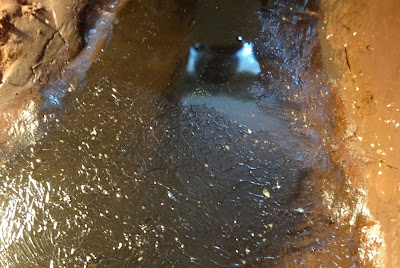 Magic Water resembles clear, still water when it cures. I experimented with stippling some clear acrylic gel to create some ripples. The effect isn't too bad for a first try but could be more natural. Apparently you can create some larger wave effects with these resin products by blowing with a straw around 8 hours into the cure time, as shown in this helpful video. I also tried modeling larger rapid waves with the acrylic gel, but unlike the ripples it never dried clear. I probably should have used smaller layers instead of one big glob of the stuff. 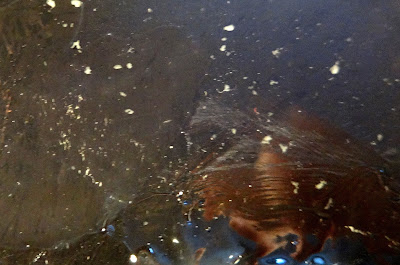 Messing with the acrylic gel left some unsightly brushmarks on the Magic Water. Fortunately I was able to erase them with a layer of Future Shine, as this admittedly obscure photo hopefully shows. You can see those brushmarks on the right; on the left they have been removed. The Future Shine does leave a sort of border, so you may have to cover a lot of water surface for a realistic effect.

Mini figure posts coming soon, as well as more RPG stuff at the new blog. Do stay tuned to both!
Posted by 1Mac at 6:13 PM 4 comments: