[2-20-2014] Welcome all! My stats show that a ton of visitors are coming to this post via Facebook, but I can't tell who sent you all. If it wouldn't be violating anyone's expectation of privacy, I'd like to know who it was; I'd like to shake his hand, as the song says. Anyway, there's more to this site than comparison shots of Tim Mee cavemen, so again, welcome, and please look around!

Part of finding cheap fantasy minis is keeping an eye out for things that were never meant for gaming but which are readily adaptable. I've found that many hobby-shop-style toys are perfect for my purposes. They aren't marketed for gamers and so aren't premium-priced, but can be as good or better than miniatures made specifically for gaming. Here are a few such toys I recently purchased.

These are new cavemen models from TimMee Toys. They make fantastic hill giants versus 1/72 minis. There are four sculpts and twelve models of each sculpt, which is probably more hill giants than I'll ever need. I may try to sell some of my extras.

Half the toys in the bag are in tan plastic. One thing I like about these minis is that on the tabletop they look like they're looking down at a 1/72 scale human-sized figure. 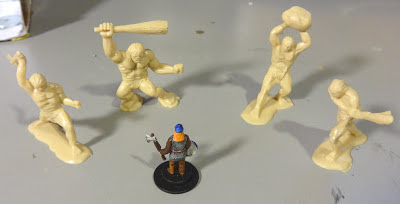 Up next are these skeleton figures from Toysmith. You used to be able to buy these without any other toys, but they now come in a set marketed as Battling Pirates, accompanied with several large swashbuckling figures and nautical accoutrements. Even with all the extra stuff, they're still pretty cheap and make excellent giant skeletons in 1/72.

By the way, shortly after buying these, I saw that Sgt. Slag has used both the cavemen and skeletons for the very purpose I intended. Obviously he stole the idea directly from my brain somehow. Actually, I'm glad for the proof-of-concept, as they look great!

For the last set of figures we go from large to small. These are Lucky Minis from Safari Ltd. You can get them from counter displays at some hobby shops and many museum and zoo gift shops for 59 cents a piece. They are made of some sort of rubbery material, so I'm not sure how they'll paint up, but they look terrific.

The bat makes a fine oversized fantasy critter, and I've already used the wings from another bat mini for a demonic conversion project. The jellyfish I got because I like the idea of making a 1/72 scale flumph, even if I'll never use it. The gorilla and bear may seem undersized, but they're actually just about right for 1/72 scale mountain gorillas and grizzly bears, if National Geographic is anything to go by:


So what are some other toy products you've adopted for gaming miniatures?
Posted by 1Mac at 10:57 PM