Slowly getting back into the habit of blogging, starting with some pics of the new Alliance trolls. EY already has a nice review, and new 1/72 fantasy blogger Philotep has a great how-to on painting one of them. My contribution will be this comparison shot with some similar miniatures.

Left to right: a Reaper Bones "Cave Troll," Sven the 1/72 comparison mini, one of the Alliance trolls, a Bones "Mountain Troll," and a Games Workshop "Mines of Moria" troll. These Alliance trolls are big; not as big as some "normal"-scale gaming minis, but big enough to compare favorably. Even if you don't game in 1/72 scale, they're big enough to work, and at 8 figures for ~$10, they're quite a deal. Stylistically they are quite similar to the Mountain Troll, which could serve as an alpha or captain of these Tolkein/Jackson-inspired bigguns. 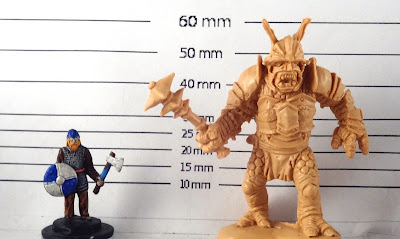 And here are the four poses in the set, of which there are two each. From the front:

And from the back:


Flash is a bit of a problem, as is sometimes the case with Red Box/Alliance. The poses are maybe a bit flat (to simplify the molding), but not as much as they could be. And the detail is actually really good; again, check out Philotep's excellent "tabletop" paintjob to see just how nice they can look. That Bones Mountain Troll is clearly a better figure, but it also retails for over $5 (it's metal counterpart is $22!). The dollar-to-quality ratio of the Alliance figures should be very tempting. Good, not great, and on a budget, which is sort of the motto around here!