Since starting Cheap Fantasy Minis a few years ago, I've gone through 3 Kickstarters expanding Reaper Miniatures excellent Bones line of cheap plastic minis. While they are standard-sized gaming minis, I've found that many of them are readily adaptable to 1/72 scale, the preferred scale of this blog. For this most recent Kickstarter, I skipped the core set and went for the Stoneskull and the Graveyard expansion, plus a few extra add-ons. The expansions had a lot more small minis and terrain pieces, which I find are best for adapting to 1/72.

My sets arrived last week, so I've taken some comparison shots of the more interesting minis.

The Stoneskull expansion includes six new kobold sculpts, four of which are shown here. I was worried that they might be too large, like the kobold leaders from the second Bones Kickstarter, but they look great. If anything they are a tick smaller and more delicately featured than the original Bones kobolds, making them even better suited for 1/72 gaming. Shown for comparison are one of the original Bones kobolds, plus an unpainted kobold from the Wrath of Ashardalon game.

Other small critters from the Stoneskull set include the gremlins on the left and the "veggie-pygmies" on the right. A Caesar Miniatures goblin is shown for comparison. I'm not sure what a veggie-pygmy is, or what use I'd have for them, but they're just a little under human-sized even in 1/72 scale.

"Stitch golems" on the left; "grave minions" from the Graveyard set on the right. The stitch golems are a little chunky-looking but just about the size of Sven. Similarly, the graveyard minions have somewhat large heads and hands but are otherwise human-sized. As mockeries of human form, they look just fine!

Plant monsters: A "saproling," and a couple of "death star lillies." The saproling is just a bit bigger than Sven, which is what I'd expect from a modestly-sized tree monster. The lillies look big enough for Sven to fit inside, if he gets too close.

Getting a little bigger. Here we have a naga from the Stoneskull set and a "carrion worm" from the Graveyard set. These would be just a little bigger than Reaper-sized humans but look suitably monstrous next to Sven.

Even bigger: a flesh golem, minotaur, and larger stitch golem from Stoneskull, plus one of the ogres from the core set. I always like when large minis are looking down, like the minotaur is doing here. It makes it look like they're sizing up smaller adversaries like Sven. 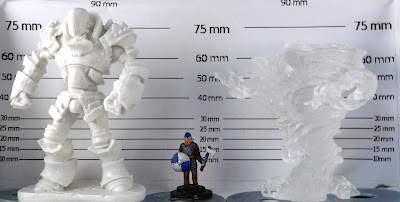 Finally, the biggest: an absolutely titanic iron golem, and a clear plastic air elemental. The latter should make a fine companion to the fire and water elementals from the previous Kickstarters.

I expect that soon after Reaper finishes fulfilling the current Kickstarter, the Kickstarter for Bones IV: I Can't Believe We're Doing Another One will launch soon after. I'm not sure I have the scratch to back this one (depends on how well I do on my sales page!), but I'll definitely keep an eye on it and live-blog updates. In the meantime, check out this gallery for a preview.
Posted by 1Mac at 10:42 PM