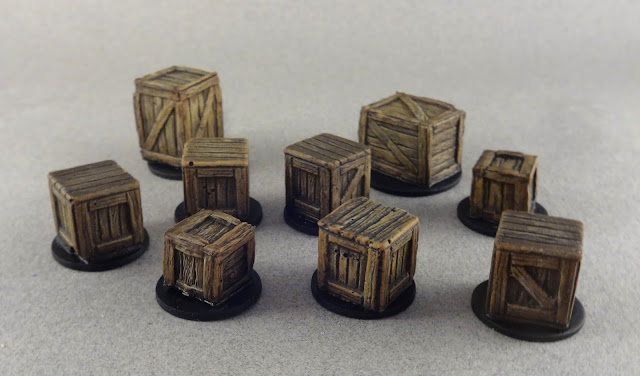 Crates! These are a mix of Reaper Bones plastic and Rebel Miniatures resin. Painted up pretty quickly using something like the techniques described in this thread. I use mostly Delta Ceramcoat craft paints: here I did a base coat of Burnt Umber, then a heavy drybrush of Raw Sienna, lighter drybrushes of Straw and white, then another light drybrush with Raw Sienna again to balance the lighter colors. Then my standard "magic" black wash. Ecce, mirabiles!

Sven, who remember is about 1 inch tall, among the Reaper crates. These have a lot of great detail but somehow became noticeably warped. The leftmost crate is obviously askew here.

The Rebel Minis crates. These also have pretty good detail, and the resin of course isn't going to warp like the PVC plastic Bones are made of. Unfortunately, some bubbles must have formed when these were cast, leaving some rather bad pockmarks on some of these.

Despite these flaws, they look pretty good as a group.

I painted up a few more of the Reaper crates as cargo for my son's toy trains. Painting minis is tricky without a base to hold onto! I added an extra layer of Future Shine for added durability during play. They need a blast of Dullcoat, but it's been too hot for spraying. 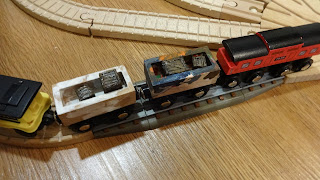 And yes, my son painted those hopper cars himself!

P.S. I hope all my dear readers remember that I also have an RPG design blog, which isn't entirely moribund. I just started a series of posts on initiative checks, which will hopefully initiate more RPG blogging in the near future. Remember that the link to new posts can always be found in the sidebar.
Posted by 1Mac at 6:05 PM