Obviously I've been on a bit of terrain kick lately. Most of the stuff I've been discussing lately isn't actually made for 1/72 scale, the preferred scale of this blog, but there are actually plenty of options native to the scale. Let's discuss them, starting with some plastic sets. 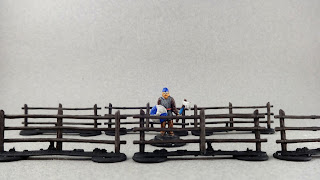 The other well above is from Italeri's Desert Tents set. Italeri also has an Urban Accessories kit that is mostly modern but very useable for all kinds of games. Linear-B's civilian sets often come with accessories; their Roman Tavern has a lot of good stuff for fantasy gamers, taverns of course being common locations in such games.


There are many more options in metal and plastic. In 20mm scale, there's the metal Moveable Objects line from CP Models and the resin Blitz Bits line from Frontline Wargaming. Phersu Miniatures and Nikolai Modelling also have lines of resin 1/72 scale accessories. Baueda's line of "supplies" is billed as working for "15-28mm" scale, and since 1/72 falls in that range, I'm including them here!

I don't have any examples of these sets. They are unfortunately hard for me to come by, as they are not only fairly pricey, they are also all made in Europe and not sold in the same shops, so shipping would be crazy for me (though with the pound historically weak to the dollar, this might be the best time to go for it). If anyone gets ahold of these and can sell to me in a batch, drop me a line!
Posted by 1Mac at 11:34 PM